Nicole upgrades to a Tropical Storm

COLUMBIA SC (WOLO) – As of the National Hurricane Center’s 10:00 AM Advisory, Nicole has become a Tropical Storm, after being classified as a Subtropical storm for over 24 hours.

TS Nicole is traveling west at 9 miles an hour, with sustained winds of 50 MPH. 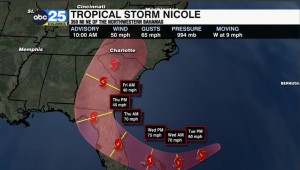 Although still a few days out, and shifts in the track are expected, as of this mornings advisory, Nicole will make landfall Thursday morning in the area of Port Canaveral, Florida, crossing the state, and turning northeast through Georgia.  There are indications that the storm could rise to a Category 1 hurricane somewhere between the Bahamas and the east coast of Florida.

Shifting from models Monday, the center of the storm has shifted from the coast, to tracking between Columbia and Greenville, SC.  Keep in mind, that the indicated track refers to the center of the storm, not the impact of the rain that will arrive before the center of the storm.  A major factor of the track will come from the turn from northwest to northeast, and if it crosses back out into the Gulf of Mexico prior to the shift, keeping in mind that tropical storms are really driven by winds aloft, roughly the jets will really play a factor over the next 48 hours or so.

This means that there are concerns for coastal flooding, flash flooding, and other concerns as the storms makes its way northeast. 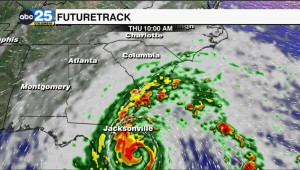 As of this morning, the Palmetto State should start feeling the impacts of Tropical Storm Nicole Thursday morning. 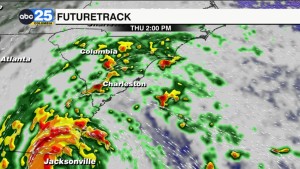 A lot of rain will fall over the southeast Thursday and Friday, with more falling into Friday. 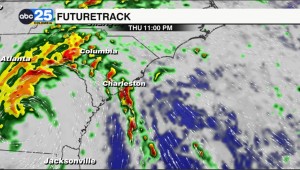 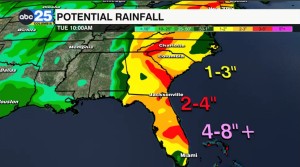 If the center of the storm tracks between Columbia and Greenville, areas of the Upstate and southwest North Carolina could see several inches of rain in a very short period of time.