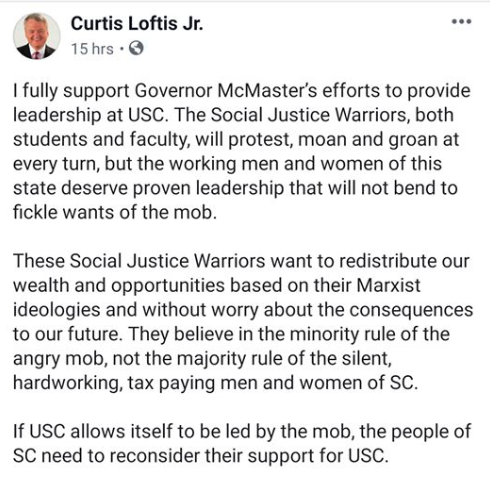 COLUMBIA, S.C. (WOLO) – ABC Columbia reached out to the office of South Carolina’s State Treasure regarding a social media post calling some college students and faculty at the University of South Carolina, Marxists.

Treasurer Curtis Loftis took to Facebook Wednesday to weigh in on Governor Henry McMaster’s decision to move forward with the controversial selection process of the university’s next president.

In a statement from the South Carolina Treasurer’s Office, “due to the obscene and threatening comments being made, many from out of state, the post is now visible to 5000 followers.”

Loftis, an alumnus of the university (’81) also refers to the students and faculty opposed to the vote as “social justice warriors who want to redistribute our wealth and opportunities…”

The post goes on to say, “If USC allows itself to be led by the mob, the people of SC need to reconsider their support for USC.”

The statement from Loftis’ office goes on to say, “His (Loftis) comment about social justice warriors referred to the protestors. He has friends on both sides of this issue but feels the board, with the governor as ex officio chairman, is certainly equipped to make this decision.”

A spokersperson for Loftis said he believes students should have an advisory role.

Adding, “There are 55,000 students and faculty members at the university and five million residents of South Carolina. Governor McMaster has the best interest of the entire state, including the University of South Carolina, at heart. The choice of the president of the university should not be made based on the protests of a few, but by the Board of Trustees with Governor McMaster as chairman.”

The Republican has held the office since 2010.

Following the announcement that Harris Pastides would retire after 10 years, USC’s Board of Trustees began a search for his successor.

In April of this year, four presidential finalists spoke to the student body. They were:

Several state lawmakers are against Governor McMaster’s role in calling for the Board of Trustees to pick a new president by July 12.

College students are still away of summer recess.

The USC Board of Trustees will meet Friday morning at 10 a.m. at the Alumni Center.

Both our Tim Scott and Maria Szatkowski will be covering the vote.

Mayor Steve Benjamin held a press conference Thursday to discuss the handling of the matter.

The Tropics are Quiet - Thankfully