A look at the SC Protests over the Weekend

After a weekend of both peaceful protests and violent ones, in Columbia, tensions that had flared had calmed Monday morning

COLUMBIA, SC (WOLO)–After a weekend of both peaceful protests and violent ones, in the City of Columbia, tensions that had flared had calmed by Monday morning. 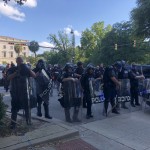 Columbia Police in Riot gear outside Main and Gervais

Sunday began with a peaceful protest at the State House. Protestors were sitting on the lawn of the State House grounds, others standing holding up signs.

There was a police presence but many officers stood back from the protestors.

Around 3:30pm protestors began to line the sidewalk on Gervais, side side by chanting “We can’t breathe’. 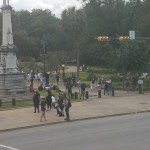 Organizers could be heard saying this is a peaceful protest, when we are done, we will go home.

But at one point, late in the afternoon, water bottles appeared to have been thrown at Police, one officer fired and responded with bean bags and protestors began running.

There were a lot of protestors gathered right in front of the State House steps and people began to scatter. It took officers several minutes to get the crowds to disperse.

More police arrived to make a blockade across Gervais Street and to call for the people to leave due to the 6pm curfew.

As of 6:30pm it appeared most of the crowds were gone.

It was a much different scene a day before.

Saturday protests erupted into violence at the Columbia Police Headquarters. 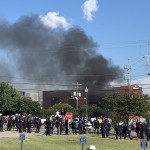 Our Crysty Vaughan on Gervais Street as peaceful protests got underway https://www.facebook.com/abccolumbia/videos/684931272076084/

Our Josh Berry on the 11pm update: