COLUMBIA, SC (WOLO)– South Carolina’s hate crime legislation is one step closer to becoming law. Wednesday afternoon, the measure known as the Clementa Pinckney Bill passed its first reading in the House. The bill’s sponsors say it will send a clear message that hate is not tolerated in South Carolina.

The bill must pass two more readings before Wednesday’s crossover deadline to be considered in the Senate. 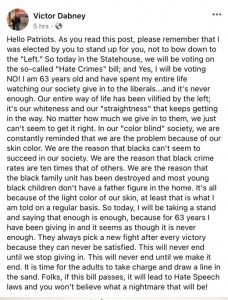 We left a message with Representative Dabney to give him a chance to expand on his comments. We have not yet received a response.

.@schousespeaker This is the face and future of the Republican Party. He should be removed from any committee assignments by Speaker Lucas today. pic.twitter.com/iDt8maTREr